My boyfriend and I are travelling around South East Asia for the next three weeks, and I plan to write quite a few blog posts about it as I go. However, there is a definite possibility that the trip is so beautiful and incredible that I don’t spend any time in the hotel writing at all! 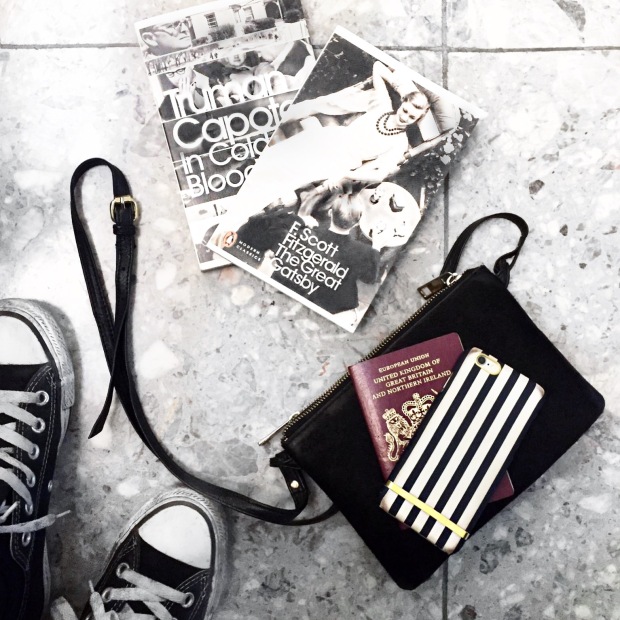 We arrived in Bangkok on June 17th in the evening, and left on the morning of the 19th, which means we had one full day in this vibrant, busy, and beautiful city.

Getting to Bangkok: for the whopping 12 hour flight, we chose to fly with EVA Air, which neither of us had flown with previously. As a novice travel blogger, I have yet to be given free first class tickets to my chosen destination (#thedream). EVA air was our best option at only around £450 return each, which was one of the lowest fares we could find. Having never flown with this airline, I was excepting the worst, so as not to be too disappointed if we had broken TVs, small seats, and little leg room. However, I genuinely believe that this was one of the best long haul flights in economy that I have ever experienced (having lived in Hong Kong and Japan, I am used to the never-ending 12 hours in a tin can in the sky). The seats were much wider than other airlines, and the leg room was more than enough for myself, as well as my 6′ 2″ boyfriend. The food was slightly better than standard airplane food, however the cabin crew service was truly excellent and I am very happy to know that at the end of the trip, we will be returning home with EVA air. 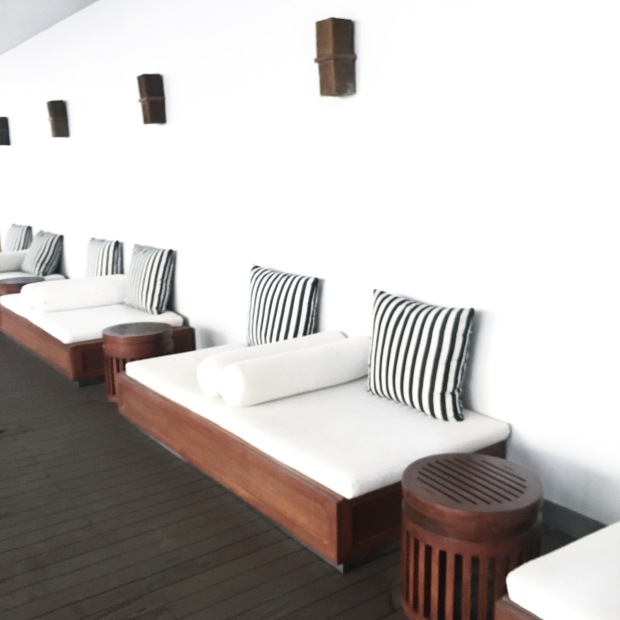 Hotel: Millennium Hilton Bangkok – The Beach  (don’t know why the image is blurry!)

Staying in Bangkok: We stayed in the beautiful Millennium Hilton Bangkok, which is situated on the western bank of the Chao Phraya River. For only 3 Baht (less than 1p!), a boat takes you across to the other river bank, where the city truly comes alive. The hotel is incredibly luxurious, and although it is one of the more expensive hotels we are staying in, it really doesn’t break the bank at around £90 a night, which we are splitting between us at £45 each. The room is very spacious with incredible views across the river.  The bathroom has an enormous stand alone shower as well as a bath and a large sink top (perfect for allllll my products). But where this hotel truly shines is its rooftop pool. The Beach, as it is named, boasts incredible views across the river, with a huge choice of seats either on the sand (yes sand!), in individual cabanas, or in the pool itself. It really is one of the most stunning hotels I have ever stayed in, and it is a shame we are only there for two nights, but I feel that this hotel well and truly lived up to it’s Hilton name. 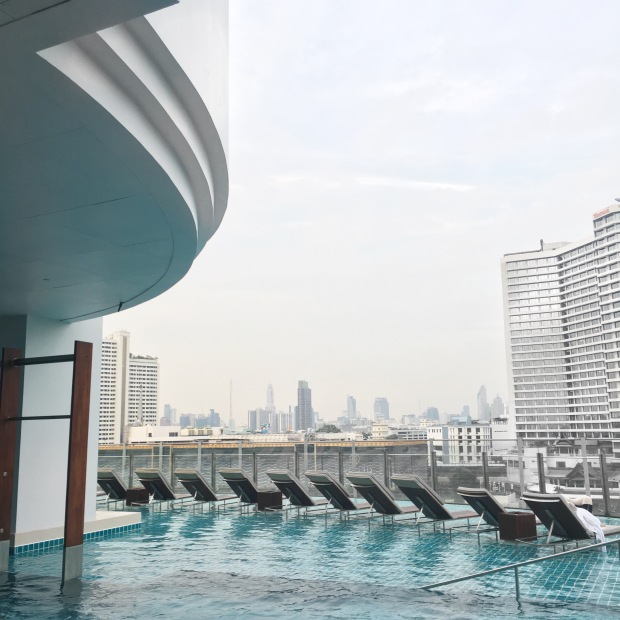 Exploring Bangkok: As we had just one day in Bangkok, there was only so much we could fit in. The city has extreme mixes of opulence from the temples and lavish shopping malls, set side-by-side with dilapidated houses and stalls. We walked for a large part of the day, but occasionally grabbed a taxi (hailed with the palm down to be polite) which are so unbelievably cheap you wonder why anyone would ever get an Uber here.
We woke up really early so we could see the temples to avoid crowds. However, we instantly fell into what we now know is a huge tourist trap! We were told the temple wouldn’t be opened to tourists for another two hours because it was a national holiday and people were praying…(turned out none of this information was correct). The man then tried to sell us a two hour tuk tuk tour around the city, which we declined, but we did leave the temples to go shopping for an hour or so (which was the plan for the later half of the day anyway). After doing some shopping in Siam Paragon, we grabbed a coffee from Starbucks and soon learnt we had been ‘had’ by a common ploy to get tourists to pay up for tuk tuk tours… Feeling like mugs, we grabbed a taxi back to the temples which were now bursting with tourists. It was pretty frustrating, but at the end of the day, we had only switched up the order our itinerary, and hadn’t paid the man for his ‘help’.

Above: One of Wat Phra Kaew’s beautiful Pagodas.

The first temple we went to was Wat Phra Kaew (the Temple of the Emerald Buddha) which is the most sacred temple in Thailand. The Buddha is carved from a single piece of jade, and is thought to have arrived in Bangkok in the 18th Century having originated in Chiang Rai in the 15th Century (…thanks Wikipedia). There are a number of individual buildings and temples situated within the walls of the Grand Palace, embellished with hundreds of thousands of tiny mosaic tiles in predominantly greens, blues, reds, and golds. There was not a single building or statue that had not been given the utmost attention, and it was truly jaw dropping walking around.

Above: Part of the Grand Palace at Wat Phra Kaew

There are some rules that tourists must be aware of. Men can not wear shorts, nor can women wear short skirts (must be bellow the knee), and shoulders must be covered. However, there is a service to rent appropriate clothes inside the gates, for just a 200 Baht deposit. Before entering the temples, you must remove your shoes, and once inside, you must be respectful, quite and some will not allow photography.
Once I had taken around 1 million photos on my phone, camera and disposable, we exited and walked about 10 minutes to Wat Pho (the Temple of the Reclining Buddha), which, as the name implies, holds a 46 metre long Buddha laying down, looking pretty chilled. Though much smaller than the Grand Palace, Wat Pho also has a number of beautiful shrines, halls, and temples. 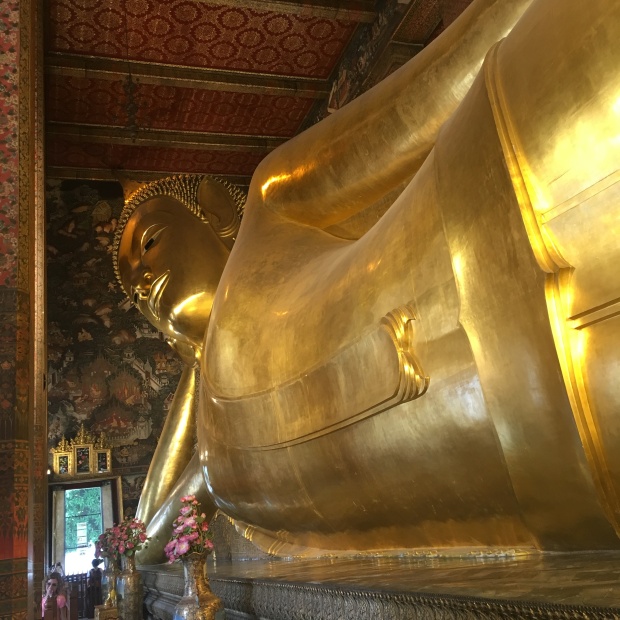 Above: Wat Pho – the 46m Reclining Buddha (obviously quite tricky to get an image of the whole Buddha)

Next: as I write this I am currently in Koh Samui, sitting in a beautiful suite in a stunning hotel. The next feature about my South East Asia travels will be up in a couple of days. In the meantime, follow my on instagram and twitter for daily updates: @thelondonfoxx, and snapchat for somewhat hourly updates: naomiharris1

2 thoughts on “Bangkok – The Start of a Three Week Adventure”